The six most famous astronauts … and five more you should know

Famous astronauts whose actions and achievements made history and set records

It’s impossible to put together a definitive list of the most famous astronauts of all time. After all, during the last 60 years, multiple generations of spaceflight fans have found awe and inspiration in different batches of cosmic explorers. But with that caveat aside, there are a handful of famous astronauts whose actions, achievements, and overall fame make them obvious choices. 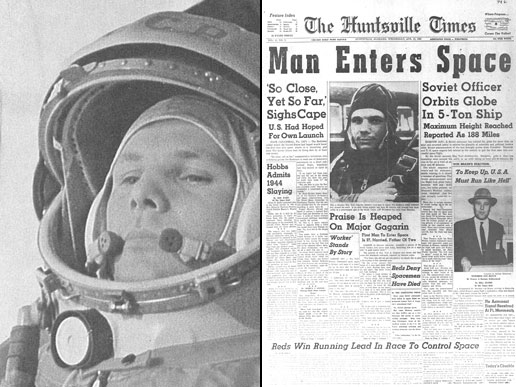 On April 12, 1961, Russian cosmonaut Yuri Gagarin (left, on the way to the launch pad) became the first human in space, making a 108-minute orbital flight in his Vostok 1 spacecraft. Newspapers like The Huntsville Times (right) trumpeted Gagarin’s accomplishment. Source: NASA

Thanks to Soviet cosmonaut Yuri Gagarin, the first words ever uttered in space were: “I see Earth. It’s so beautiful!” They may not resonate like the first words spoken on the Moon, but they do succinctly capture the spirit of spaceflight.

Nearly six decades ago, Gagarin blasted off the surface of our planet to undertake a 108-minute spaceflight that reached an altitude of 203 miles (327 kilometers). This cemented Gagarin as the first human to fly in space. 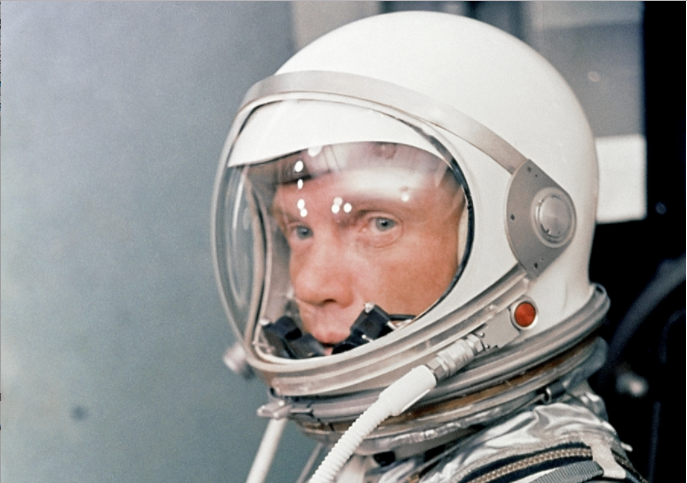 In February 1960, famous NASA astronaut John Glenn donned his silver Mercury pressure suit in preparation for his launch into the history books aboard Friendship 7. Source: NASA

In 1962, just under a year after Gagarin scouted space for the first time, astronaut John Glenn became the first American to orbit Earth. His spacecraft, the Friendship 7, orbited Earth three times in just under five hours.

Years later, in 1998, Glenn also became the oldest person to fly in space when he joined the STS-95 crew aboard Space Shuttle Discovery. 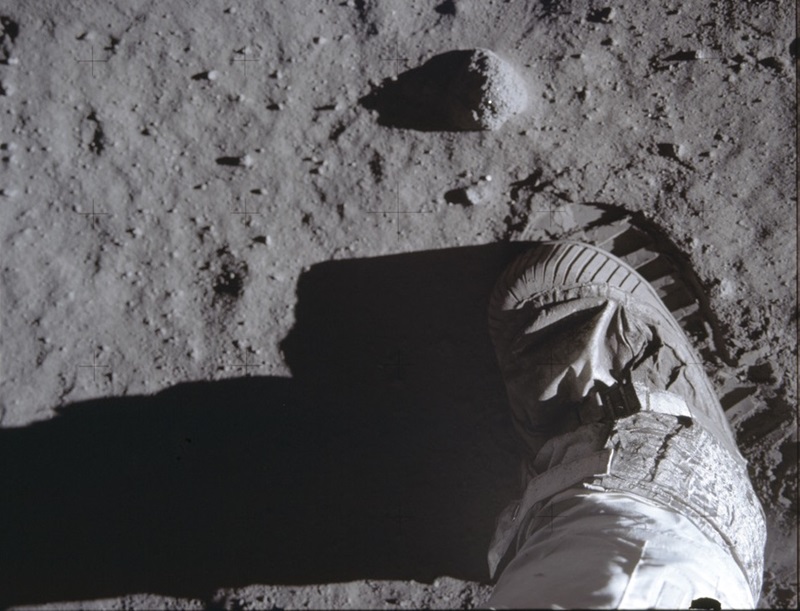 Famous astronaut Buzz Aldrin took this photo of his boot and a partial bootprint as he tested the mechanics of the lunar soil. The rock in front of his toe measures 2 inches (5 cm) across. Source: NASA

The first steps on the moon: Neil Armstrong & Buzz Aldrin

In perhaps the most enthralling television broadcast of all time, American astronaut Neil Armstrong stepped down from the ladder of their lunar lander onto a dull gray, alien surface. After what seemed like an eternity (though it lasted only 11 seconds), Armstrong uttered the words that still resonate today: “That’s one small step for man, one giant leap for mankind.”

It marked the culmination of a mission that had begun on a sunny Florida morning four days before, the fulfillment of a goal set eight years earlier by President John F. Kennedy, and the achievement of the dreams of countless people over the centuries who had stared in awe at Earth’s brilliant satellite.

After waiting anxiously for 20 minutes, Buzz Aldrin descended the Eagle’s ladder and joined Armstrong on the surface. For two and a half hours, the pair of famous astronauts gathered soil samples, deployed scientific experiments, planted a U.S. flag, and talked with President Nixon from the Oval Office. They also ensured themselves a prominent spot in the history books. 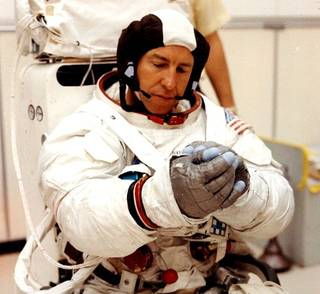 During a training session at the Kennedy Space Center on Jan. 28, 1970, famous astronaut Jim Lovell suits up for an extravehicular activity simulation for the Apollo 13 mission. Source: NASA

American astronaut Jim Lovell commanded the ill-fated Apollo 13 mission to the Moon (a role played by actor Tom Hanks in the film version the event). The first two days of the mission went largely according to plan, albeit little noticed by the broader public. None of the three major U.S. TV networks carried the crew’s primetime television broadcast the evening of April 13.

But the world certainly took notice that night when an oxygen tank in the spacecraft’s service module exploded. This instantly put the mission — and the lives of the astronauts — in serious jeopardy. The harrowing return journey that followed transfixed the nation and the world alike, and it still serves as the most dramatic space survival story to date. 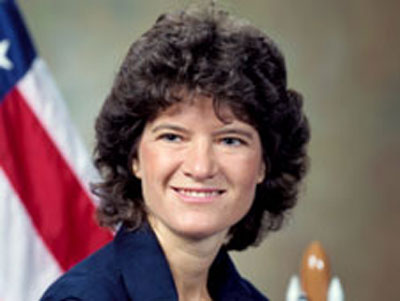 In a space agency filled with trailblazers, astronaut Sally Ride was a pioneer of a different sort. The soft-spoken California physicist broke the gender barrier in 1983 when she rode to orbit aboard space shuttle Challenger, becoming America’s first woman in space. (Valentina Tereshkova, a Soviet female cosmonaut, crossed the boundary of space back in 1963.)

After two shuttle flights, Ride went on to an award-winning academic career at the University of California, San Diego, where her expertise and wisdom were widely sought on matters related to space. She also holds the distinction of being the only person to serve as a member of both investigation boards following NASA’s two space shuttle accidents. 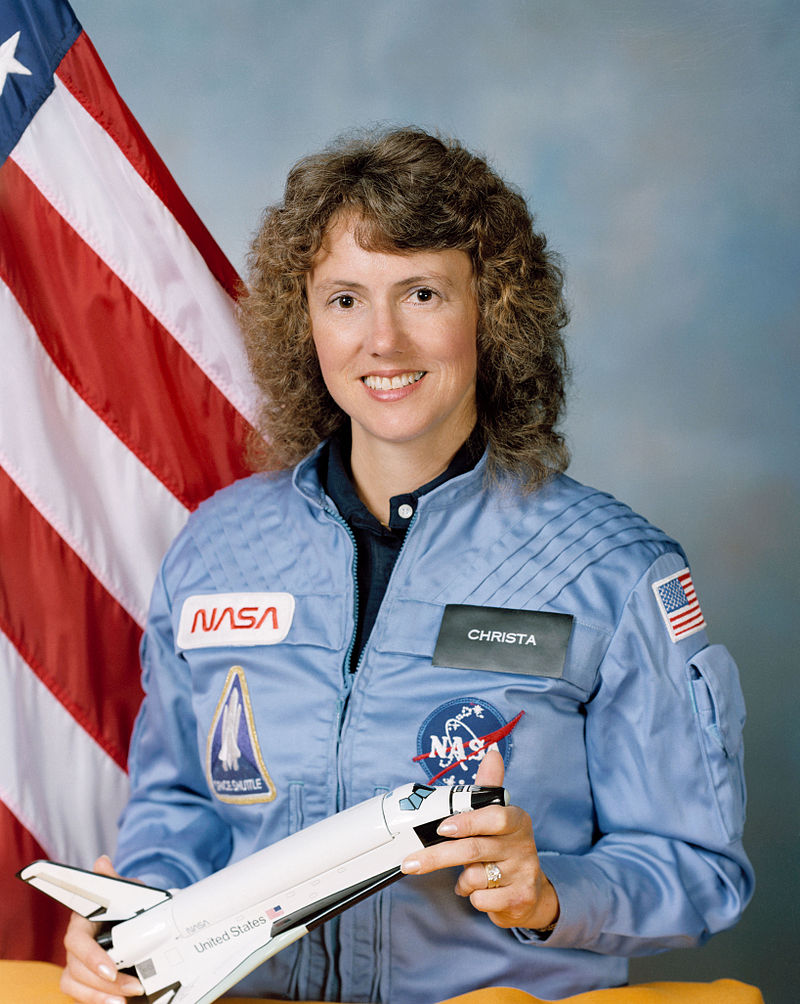 The first American civilian to go to space: Christa McAuliffe

Highschool teacher Christa McAuliffe carried the dreams of countless students, as well as educators, with her during her rise to fame in the mid 1980s. As part of NASA’s Teacher in Space Project, she was selected from a pool of more than 10,000 applicants to be the first American civilian to go to space. The goal was to have McAuliffe communicate with students while orbiting Earth, not only inspiring them, but also fostering public interest in spaceflight.

Tragically, on January 28, 1986, the Space Shuttle Challenger broke apart after launch, killing McAuliffe and her six crew members. Yet her legacy lives on. Since her death, many schools and scholarships were named after McAuliffe, honoring her contributions to humanity’s quest to explore the heavens.

Flying aboard Space Shuttle Endeavor in 1992, Dr. Mae Jemison became the first black woman to travel into space, orbiting Earth some 127 time over a period of nearly eight days.

Jemison also wrote a number of children’s books, and in 1993, she even appeared in an episode of Star Trek: The Next Generation. The pioneering astronaut has since been inducted in both the International Space Hall of Fame, as well as the National Women’s Hall of Fame. 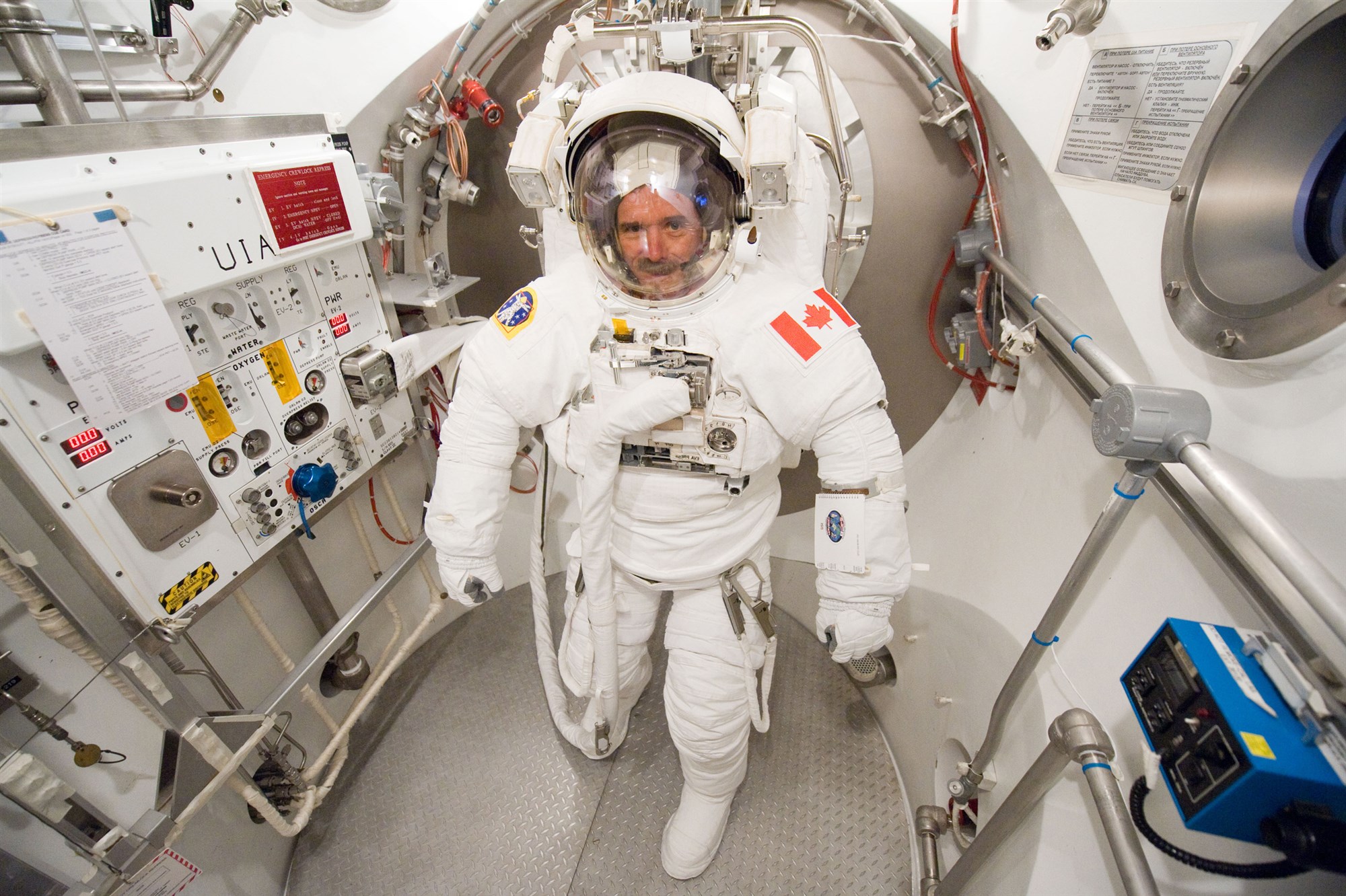 Canadian astronaut Chris Hadfield is perhaps one of the most publicly engaging famous astronauts around today. Although now retired, Hadfield visited two separate space stations during his career — first the Russian Mir in 1995, then two stints on the ISS in 2012 and 2013.

While on the latter orbiting lab, Hadfield piqued the public’s interest when he played guitar. He even recorded the first song in space, Jewel of the Night, releasing it on Christmas Eve in 2012. During his 2013 stay, he recorded a viral cut of him performing his tribute to David Bowie’s famed song “Space Odyssey.” A few years later in 2015, Hadfield went on to write a #1 international bestseller called An Astronaut’s Guide to Life on Earth: What Going to Space Taught Me About Ingenuity, Determination, and Being Prepared for Anything. 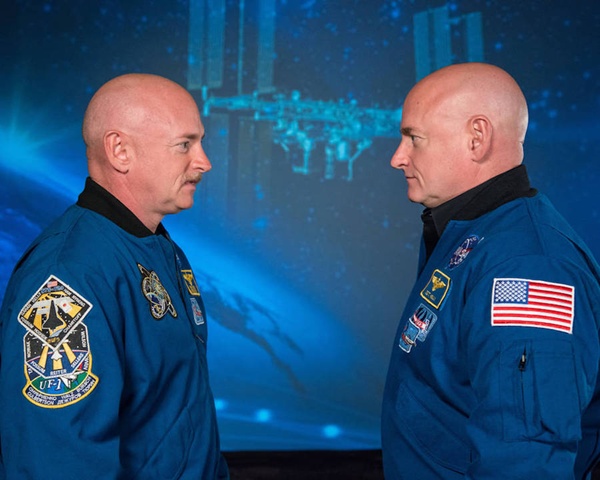 Brothers compete. So in 2016, when astronaut Scott Kelly returned to Earth after spending a year on the International Space Station (ISS), it must have really annoyed his identical twin brother — retired astronaut Mark Kelly — that Scott was temporarily two inches taller than when he left. But that result was insignificant when compared to the real results of NASA’s Twins Study, which tracked how the twins’ different environments (space and Earth) affected them, down to the genetic level.

The relatively stoic Kelly brothers are no stranger to the limelight, yet they seem far from the type to seek it out. Following his long stint in orbit, Scott published the best-selling book Endurance: My Year in Space, A Lifetime of Discovery (Vintage, 2017). Meanwhile, Mark, is currently pursuing a U.S. Senate seat in Arizona.