The Space Race truly began to take flight when the Cold War heated up between the United States and the former Soviet Union in the late 1950s. The Soviets had managed to launch the first functioning satellite, Sputnik 1, into space back on October 4, 1957 (almost six months before the U.S. launched their first satellite, Vanguard 1). But it wasn’t until April 12, 1961, that the Soviets sent the first human, Yuri Gagarin, into orbit around our home planet.

Now, some 60 years later, humanity is on the precipice of an astronautical renaissance. A burgeoning private spaceflight industry is on pace to start sending tourists into space as soon as early 2021. Actor Tom Cruise is slated to venture to the International Space Station in October 2021. And by 2024, NASA’s Artemis program aims to send the first batch of astronauts back to the Moon in more than 50 years.

It’s an electrifying time. And things are only going to get more exciting in the years to come. So, before the proliferation of crewed spaceflight really takes off, let’s first look back at the history of the Space Race, which helped us reach this point.

The Space Race is generally considered to have lasted from about 1957 to 1975, but the history of spaceflight began long before that.

11th century: Using a combination of sulfur, charcoal, and potassium nitrate (saltpeter), the Chinese create the first fuel that can propel early rockets. Of course, those rockets are used in war.

July 17, 1929: Goddard launches the first rocket equipped with scientific instruments from Auburn, Massachusetts. The modest rocket carries both a barometer and a camera.

Sep. 29, 1945: Shortly after World War II ends, von Braun arrives at Fort Bliss, Texas, along with six other German rocket scientists. He spends the next 15 years working with the U.S. Army on ballistic missile technology.

Oct. 4, 1957: The Soviet Union secretly fires Sputnik 1 into space, making it the world’s first artificial satellite. The beach-ball sized, 190-pound orb circles the globe at 18,000 miles per hour, orbiting Earth once every 100 minutes for 21 days. The Space Race between the United States and the Soviets officially begins.

Nov. 3, 1957: The Soviets send the first living creature — Laika the dog — into orbit aboard Sputnik 2. (In 2008, Russian officials unveiled a monument to Laika, who, before her spaceflight, was a stray wandering the streets of Moscow.) 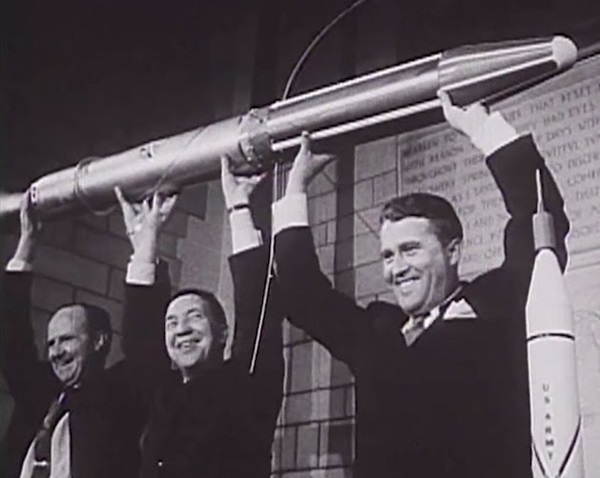 Bill Pickering (left), James Van Allen (center), and Wernher von Braun (right) triumphantly hold a model of Explorer 1 above their heads the day after it became the first American satellite to orbit the Earth on January 31, 1958. Photo: NASA/JPL

Jan 31, 1958: The United States uses a modified V-2 rocket to launch the first American satellite, Explorer 1. The satellite transmits data for about four months before its batteries die. It continues to circle Earth for 58,000 more orbits, eventually burning up upon re-entry into the atmosphere on March 31, 1970.

Oct. 1, 1958: The National Aeronautics and Space Administration (NASA) is established by the U.S. Federal Government.

May 28, 1959: The United States launches the first primates into space, Able and Baker, on a suborbital flight. Dozens more “astrochimps” were trained by NASA during Project Mercury.

April 12, 1961: Yuri Gagarin of the Soviet Union becomes the first man in space, completing a single, 108-minute orbit aboard the Vostok 1 spacecraft.

May 5, 1961: Alan Shepard of the United States blasts off aboard a Redstone rocket to become the first American in space during a 15-minute suborbital flight.

May 25, 1961: U.S. President John F. Kennedy makes his famous speech about landing Americans on the Moon to Congress, announcing:

“First, I believe that this nation should commit itself to achieving the goal, before this decade is out, of landing a man on the Moon and returning him safely to the earth. No single space project in this period will be more impressive to mankind, or more important for the long-range exploration of space; and none will be so difficult or expensive to accomplish.” 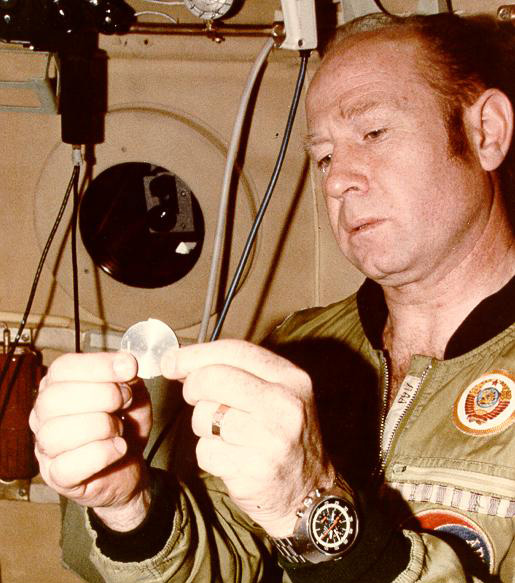 June 2, 1966: The U.S. achieves the first soft landing on the Moon with the robotic lunar lander, Surveyor 1.

Jan. 27, 1967: Catastrophe strikes. An electrical fire breaks out inside the Apollo 1 capsule, which is filled with pure oxygen, during a countdown rehearsal. NASA astronauts Gus Grissom, Ed White, and Roger Chaffee try in vain to open the locked door. All three perish.

April 23, 1967: Vladimir Komarov becomes the first person to die during spaceflight when his problem-plagued Soyuz 1 craft crashed into Earth following stability issues and a failed parachute deployment. (Komarov reportedly suspected the mission was doomed before taking off, but refused to back out because his close friend, Yuri Gagarin, was his replacement. Komarov couldn’t bear to see Gagarin killed, even if it cost his own life.)

Oct. 11, 1968: The first live views of astronauts in space are broadcast on television during the first crewed Apollo mission, Apollo 7. (Astronauts Don Eisele, Wally Schirra, and Walter Cunningham are credited as being the first crew to carry out a mini-mutiny in space.)

Dec. 21, 1968: Apollo 8 launches aboard a Saturn V rocket before ferrying three American astronauts — Frank Borman, Jim Lovell, and Bill Anders — to the Moon. The crew becomes the first humans to circle the Moon. 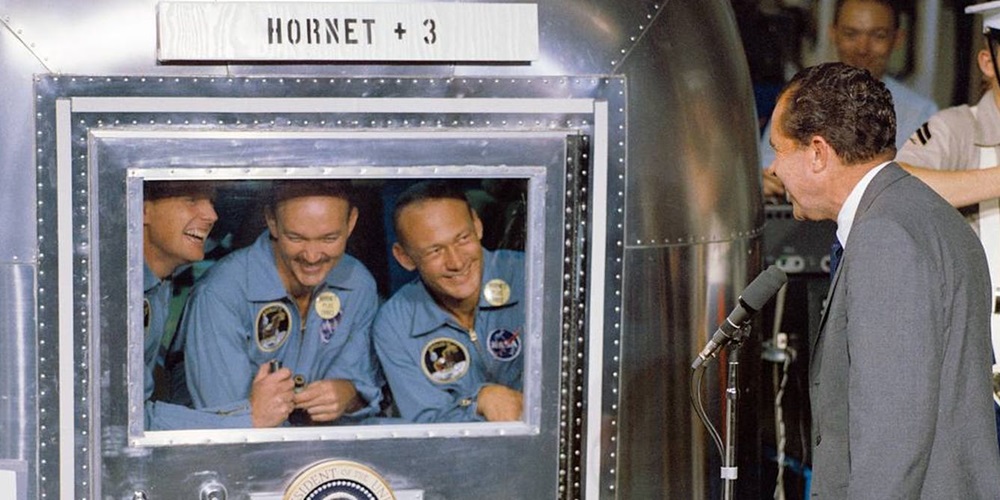 President Richard M. Nixon welcomes the Apollo 11 astronauts aboard the USS Hornet, the recovery ship for the mission, where they are quarantined. From left to right: Neil A. Armstrong, Michael Collins and Edwin E. Aldrin. Photo: NASA

July 20, 1969: Apollo 11 astronauts Neil Armstrong and Buzz Aldrin — while command module pilot Michael Collins orbits above — become the first humans to set foot on the Moon. The historic feat manages to fill President John F. Kennedy’s 1961 promise of landing Americans on the Moon by the end of the decade, some six years after his assassination.

April 13, 1970: The Apollo 13 disaster occurs. Three U.S. astronauts — Jim Lovell, Jack Swigert, and Fred Haise — are within reach of the Moon when an oxygen tank explodes. The astronauts migrate from the life-sustaining Service Module to the Lunar Module before carrying out a harrowing, multiday return trip back to Earth, which captivated the world.

April 19, 1971: The Soviet’s Salyut 1, the world’s first experimental space station, successfully launches. The station, made by combining parts of the Soviet Almaz and Soyuz spacecraft, measures about 45 feet long and contains three main compartments where future crews can live and work.

April 21, 1971: Soyuz 10 launches with the plan to become the first mission to board a space station. Though the Soyuz 10 crew docks safely with the Salyut 1, issues with the entry hatch prevent them from entering. During their return, leaking toxic chemicals cause one cosmonaut to pass out, but all three crew members ultimately survive. 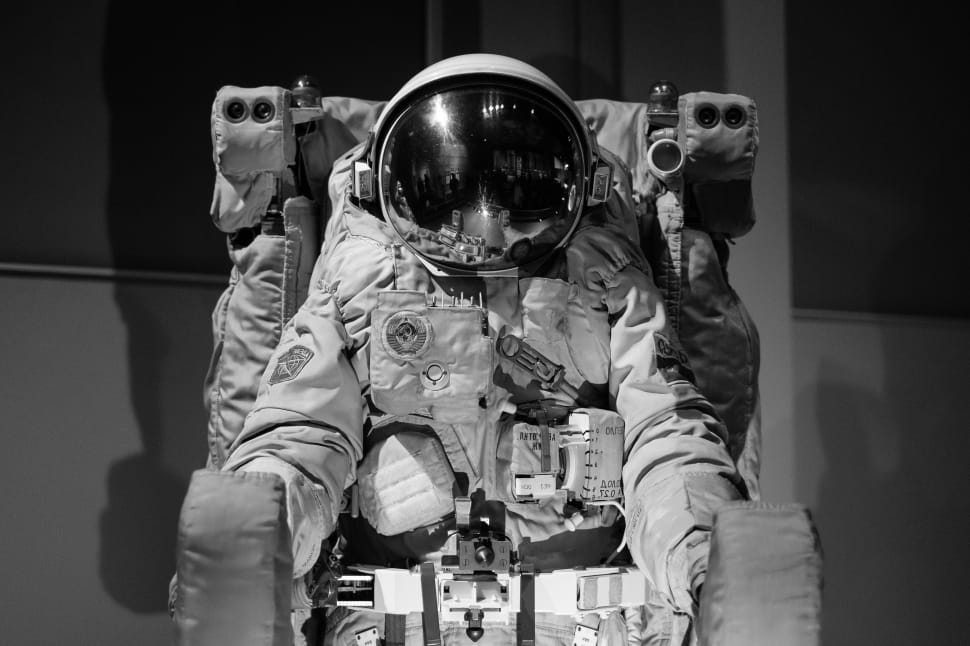 Following the only deaths to have ever occurred in space, the USSR started a policy requiring all cosmonauts to wear pressurized spacesuits during reentry. Photo: Peakpx.com

June 6, 1971: Soyuz 11 docks with the Salyut 1. The three crewmembers — Georgi Debrovolski, Vladislav Volkov, and Viktor Patsayev — successfully enter the space station and spend three weeks carrying out experiments, setting the record for the longest time spent in space at that time. Upon returning to Earth, unsuspecting recovery crews discover the Soyuz 11 crew died during re-entry, a result of depressurization due to a faulty valve.

Jan. 5, 1972: NASA begins development of the Space Shuttle, a reusable launch vehicle, under the guidance of President Richard Nixon.

May 14, 1973: The United States launches the first American space station, Skylab, aboard a Saturn V rocket.

November 16, 1973: The infamous Skylab 4 “mutiny” occurs, with astronauts reportedly going on strike, purposefully turning off their radios and refusing to talk to ground controllers. In reality, the crew is simply overworked and communication is lacking. But a long heart-to-heart with ground controllers helps alleviate the issues. 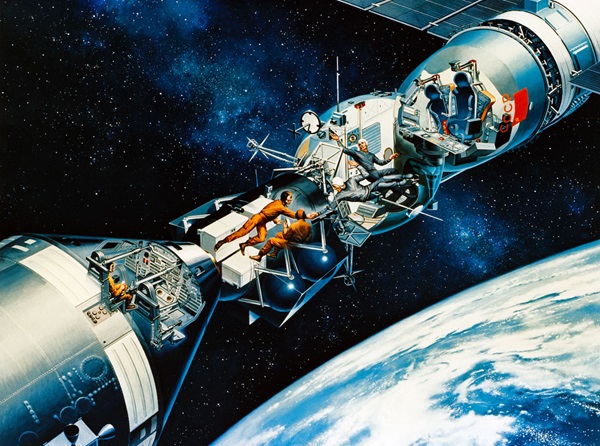 Soviet cosmonauts and American astronauts shake hands in orbit as the two nations’ spacecraft dock during the Apollo-Soyuz mission, as seen in this artist’s illustration. Phto: NASA/Davis Meltzer

July 17 1975: The Space Race ends with the Apollo-Soyuz docking mission — humanity’s first international space mission — when U.S. astronauts and Soviet cosmonauts link up in Earth orbit and shake hands. Over the next two days, the two crews team up to perform a series of scientific experiments and technology demonstrations. But the mission’s main purpose is far more earthly. It is a political demonstration of peace.