An overview of the history of Saturn, the ringed planet.

This image was captured on February 9 by Cassini’s narrow angle camera, when the spacecraft was about 69 million kilometers (43 million miles) away. A series of exposures through different filters were combined to form the color image. The icy moon Enceladus is faintly visible on the left. Source: NASA/JPL/Space Science Institute

Saturn, also known as the ringed planet, is best known for its distinct ring system. These rings have fascinated stargazers for centuries. Although through binoculars or a small telescope the ringed planet appears surrounded by a single solid ring, it actually has seven large separate rings that are separated by dark divisions. Other fainter rings have been discovered as telescope technology has improved.

What are Saturn’s rings made of?

The rings are about 170,000 miles across and are actually made up of billions of particles, ranging from the size of a grain of sand to the size of a building that is a couple stories high. Some are even as tall as mountains. Composed predominately of water ice, the rings also draw in rocky meteoroids as they travel through space. They would look mostly white if you looked at them from the cloud tops of the ringed planet.  Each ring also orbits at a different speed around the planet. The ice particles fall into a ring shape because each one follows a similar orbital path. The rings themselves contain a number of gaps and structures. Some are created by Saturn’s many small moons, while others continue to puzzle astronomers.

When was the ringed planet discovered?

When Galileo Galilei first observed Saturn in 1610, he thought that the rings were enormous moons. One positioned on each side of the planet. Over several years he noted that the rings changed shape and even disappeared. We know now that Galileo was observing a ring plane crossing, which occurs because Saturn’s equator and its rings are tilted relative to its orbit. As it circles the Sun, the orientation of the equator and rings appears to change, which causes us to sometimes see the rings edge on. This makes it look like they disappear.

In 2004, NASA and the ESA’s Cassini-Huygens mission became the first to enter orbit around the ringed planet, taking detailed observations not only of the planet, but also of its ring system. Cassini directly measured the mass of the rings via the gravitational effects as the spacecraft passed between the rings of Saturn and its cloud tops. It found that the ring are about half as massive as Earth’s Antarctic ice shelf, with the mass spread across a surface area that is 80 times larger than Earth.

Artist’s concept of Cassini diving between Saturn and its innermost ring. Source: NASA/JPL-Caltech

What planets have rings?

Saturn is not the only planet in the solar system with rings. Jupiter, Uranus, and Neptune also contain faint ring systems.

How did Saturn get its rings?

Astronomers have two main theories that explain the origin of Saturn’s rings. One theory is that the rings were once a moon of Saturn whose orbit decayed until it came close enough to be ripped apart by tidal forces. Alternatively, this moon may have disintegrated after being struck by a large comet or asteroid. The other theory is that the rings were never a solid body but are instead left over from the original material in the solar nebula where Saturn formed. 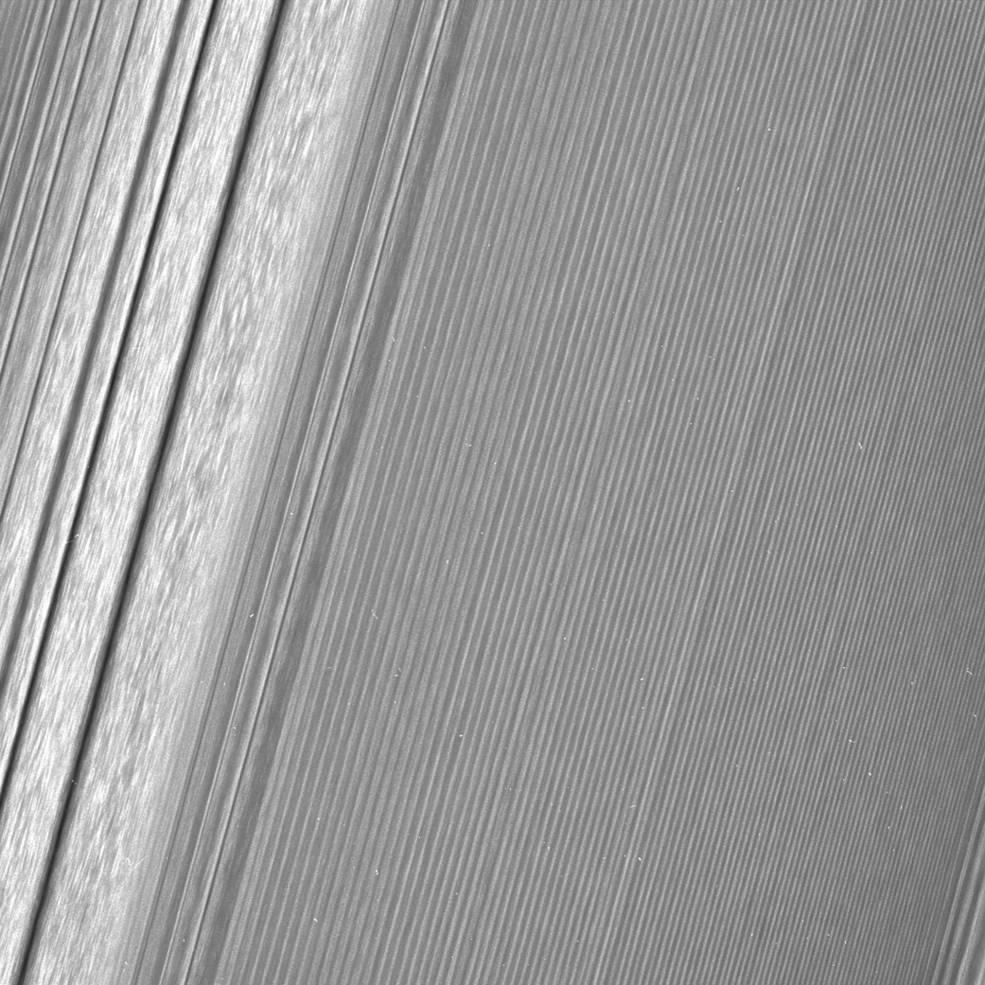 This Cassini image features a density wave in Saturn’s A ring (at left) that lies around 134,500 km from Saturn. Source: NASA/JPL-Caltech/Space Science Institute

How old are Saturn’s rings?

Estimates of the age of Saturn’s rings vary from very young to as old as the formation of Saturn itself, which was 4.5 billion years ago. However, data from Cassini suggests that they are much younger and most likely formed within the last 100 million years. Because the rings are continually losing material, they were likely more massive in the past. Based on current depletion rates, astronomers think that they could disappear within 300 million years.

Arguably, Saturn’s rings are one of the most fantastic structures you can see in the solar system and we are extremely lucky to be around to see them. Even in the middle of their lifetime we might always know Saturn to have rings considering humanity’s perspective of time in contrast to the long timeline events play out in space. If rings are temporary; however, we might have just missed seeing giant ring systems around Jupiter, Uranus, and Neptune, compared to their very thin ringlets today.