The Gas Giant hosts 79 moons, but scientists are particularly intrigued by those known as the Galilean satellites. 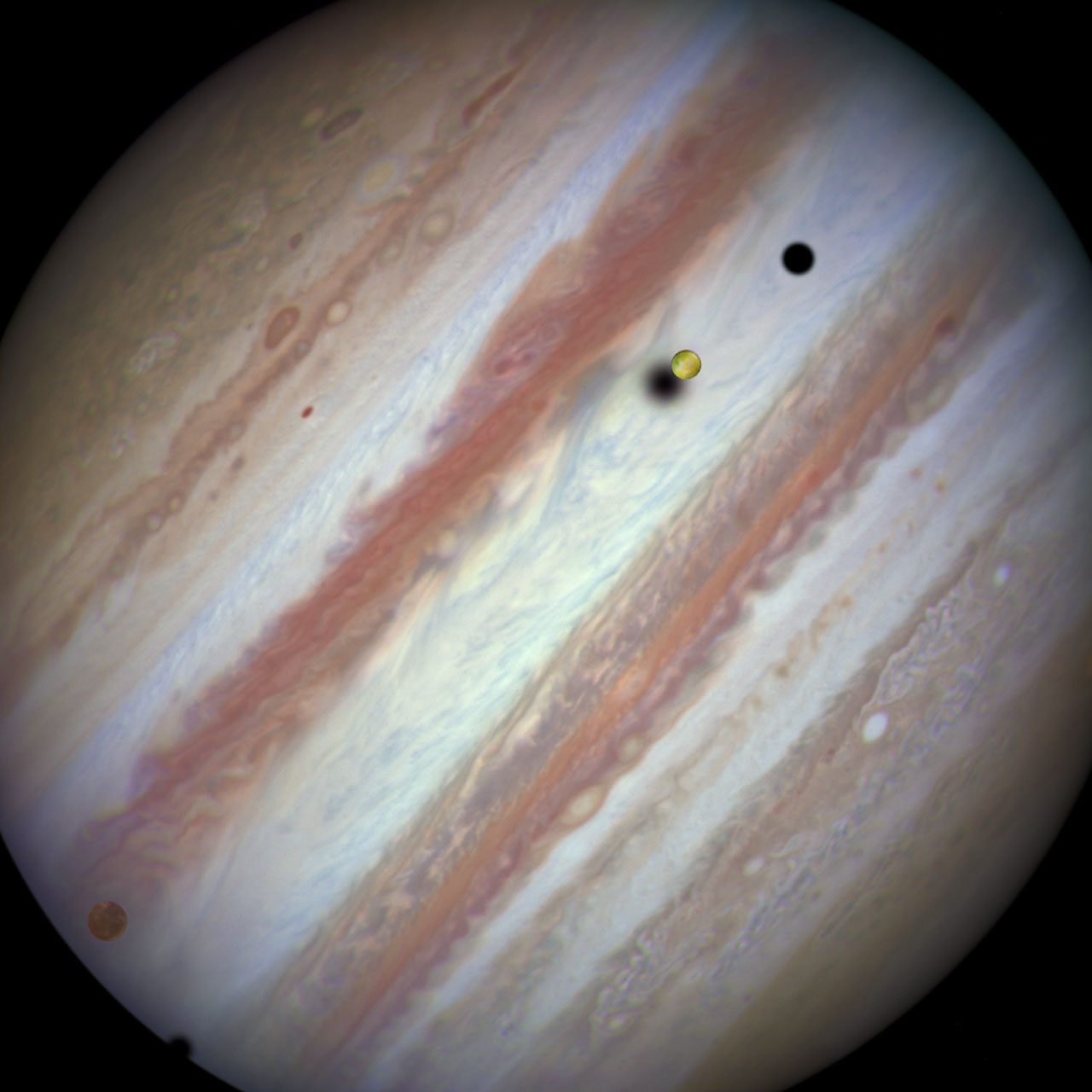 Jupiter is rich with moons, but Io, Europa, Ganymede, and Callisto are its standouts. In this image, both Callisto (left) and Io (right) are visible with Europa’s shadow also visible at the top right. Credit: NASA, ESA, Hubble Heritage Team

Jupiter isn’t just king of the planets because its big, the gas giant also has the most moons. In total, scientists think Jupiter has 79 moons. Only 53 of those are named while the others await official designation.

Though all of Jupiter’s moons are of interest, four in particular stand out, the Galilean satellites. These are Jupiter’s largest moons, Io, Europa, Ganymede, and Callisto and, as their name suggests, they were first spotted by astronomer Galileo Galilei in 1610. But what makes these four moons so special? 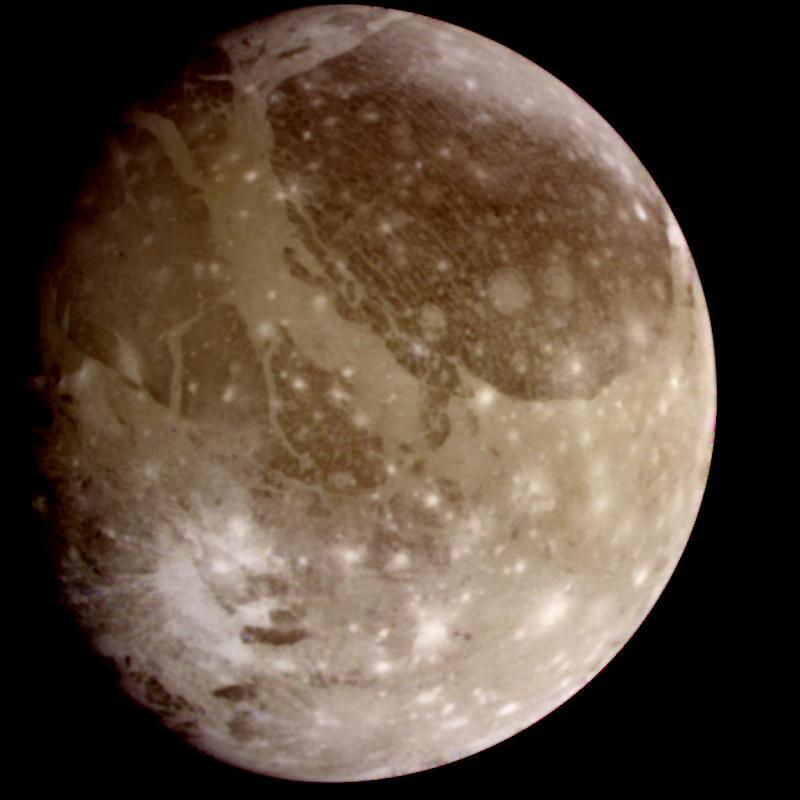 Ganymede is the solar system’s largest moon and the only natural satellite with its own magnetic field. Because of its magnetic field, Ganymede has its own northern lights around the regions near its north and south poles.

In 1996, Hubble found evidence that Ganymede has a thin oxygen atmosphere, but researchers think it’s far too thin to support life as we know it.

Ganymede’s surface is a predominately icy and a crisscrossed collection of old and new(er) terrain. The dark regions are heavily cratered, indicating that it may be the original crust of the satellite. The lighter regions are much younger and smooth, possibly the result of tensional faulting or the release of water from beneath Ganymede’s surface. 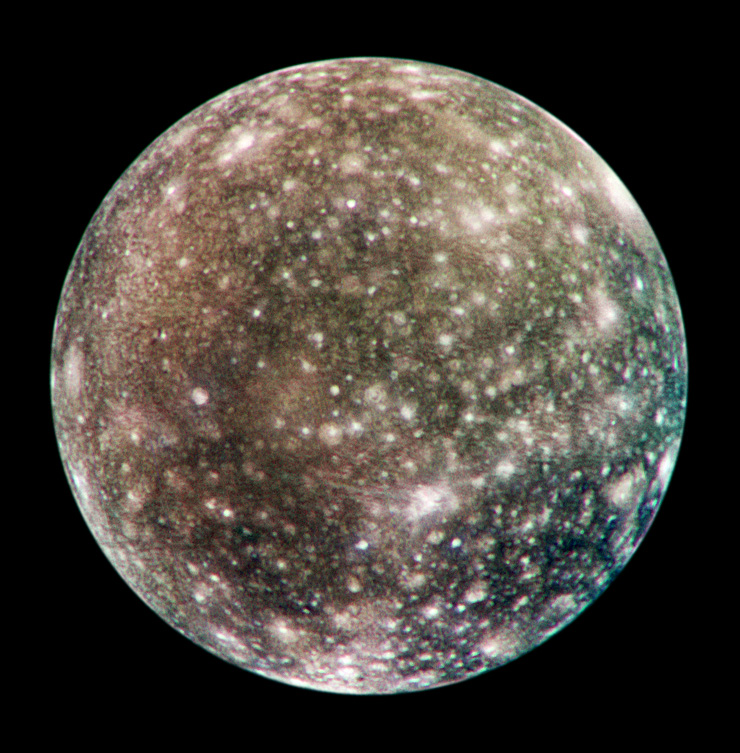 The cosmic microwave background (CMB) is a snapshot of the early universe; it is the oldest light we can see. This light has been Doppler shifted into the microwave portion of the spectrum, outside the realm of naked-eye observing. In this image, generated with data from the Planck satellite, different colors represent tiny temperature fluctuations in the universe. Credit: ESA and the Planck Collaboration

Callisto may not be the largest moon (its Jupiter’s second largest and third largest in the solar system) but it is the most heavily crater object in the solar system. This made scientists view the satellite as an “ugly duckling” but just like in the story, Callisto may be hiding a secret. Data from Galileo suggests that a salty ocean could be just below its surface.

If the ocean is there, researchers estimate that it’s about 155 miles (250 kilometers beneath its icy crust. And because Callisto’s interior may have layers of ice mixing with rock and metal, there’s a possibility that this satellite is supporting life. 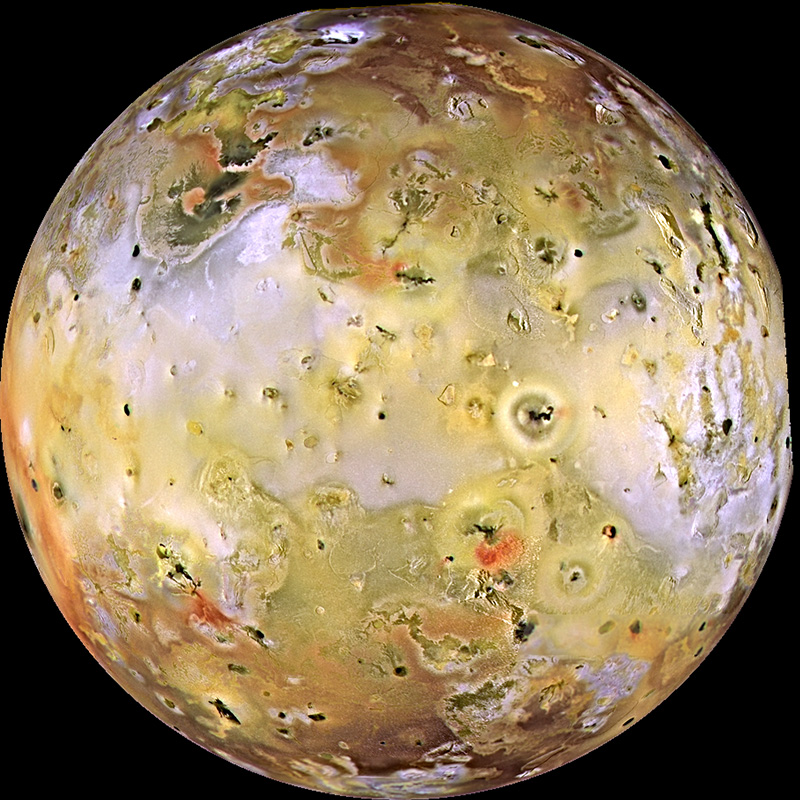 Io (pronounced “EYE oh”) is the most volcanically active world in the solar system. Hundreds of volcanoes dot its surface. Lava fountains, dozens of miles high, erupt from some of them. Io has a combination of Jupiter, Europa and Ganymede and their gravitational tug of war to thank for its high activity.

A bit larger than the Moon, Io is Jupiter’s third largest moon. It is tidally locked to Jupiter, meaning that only one side ever faces that planet during its orbit. The Moon is similarly tidally locked to Earth. But unlike the Moon which has a mostly circular orbit, Io’s is elliptical. This causes the moon to experience tremendous tidal forces. As Io goes about its orbit, the gravitational effects on one side are great than that on the other, this causes the Io’s surface to bulge up and down. The same effect can be seen on Earth because of the Moon. But where the Moon pulls Earth’s tides to highs and lows of about 60 feet (18 meters), Io’s surface is fluctuating by as much as 330 feet (100 meters).

But Io causes just as much trouble for Jupiter. At an orbit of about 262,000 miles (422,000 kilometers), Io crosses Jupiter’s magnetic field, turning the moon into a giant electric generator. The current generated by Io then cuts back to Jupiter and creates lightening in the gas giant’s upper atmosphere.

All in all, Io is chaotic and although life has been found even in the most inhospitable locations on Earth, most researchers don’t think this moon is unlikely to host any. 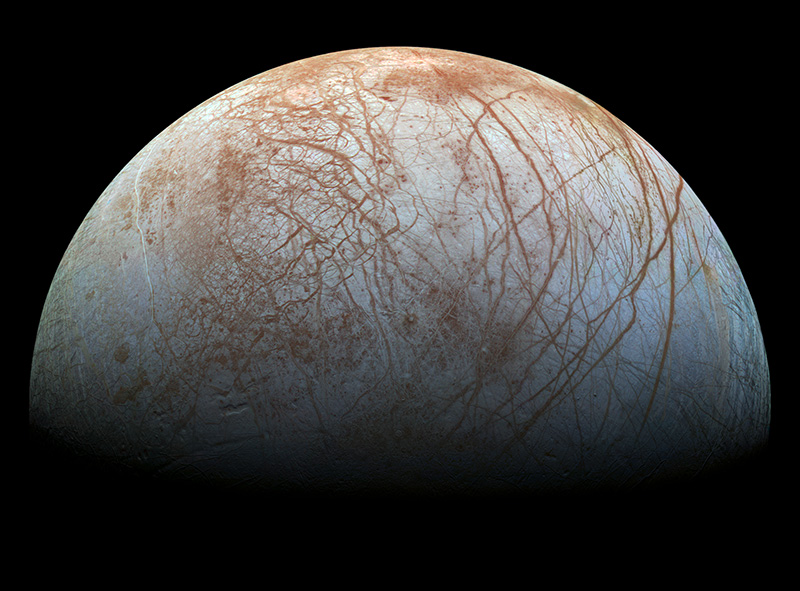 Europa is considered one of the most promising locations in the local search for life. Credit: NASA/JPL-Caltech/SETI Institute

The Voyager spacecrafts flew by Europa in 1979 and scientists got their first hints that the moon’s icy surface might be hiding an ocean of liquid water. Ever since, humanity has imagined countless science fiction scenarios for alien life to be thriving in a Europan ocean.

And sci-fi writers aren’t the only ones intrigued by life on this moon. Europa’s shell is approximately 10 to 15 miles (15 to 25 kilometers) thick and beneath it lies an ocean 40 to 100 miles (60 to 150 kilometers) deep. If true, that would mean Europa holds twice as much water as all of Earth’s oceans combined on a body only a quarter of our planet’s diameter.

Recently the Hubble Space Telescope also spotted signs that some of that water may be leaking out into space, meaning it would be possible for a spacecraft to sample Europa’s ocean without ever touching down.

Of the main requirements astrobiologists think are necessary for life, Europa is seemingly only lacking an energy source. Jupiter is about 5.2 astronomical units — where 1 AU is the average distance between the Sun and Earth — from the Sun, so any sunlight that reaches Europa is about 25 times fainter than at Earth. So, while sunlight isn’t a good energy source, NASA’s Galileo spacecraft saw signs of convection occurring in Europa’s ice layer. Galileo explored the Jupiter system from 1995 to 2003. During that time, it spotted pits and domes on Europa’s surface. Heating from below could be the culprit, causing the cooler, dense ice to sink while the warmer less-dense ice rises.