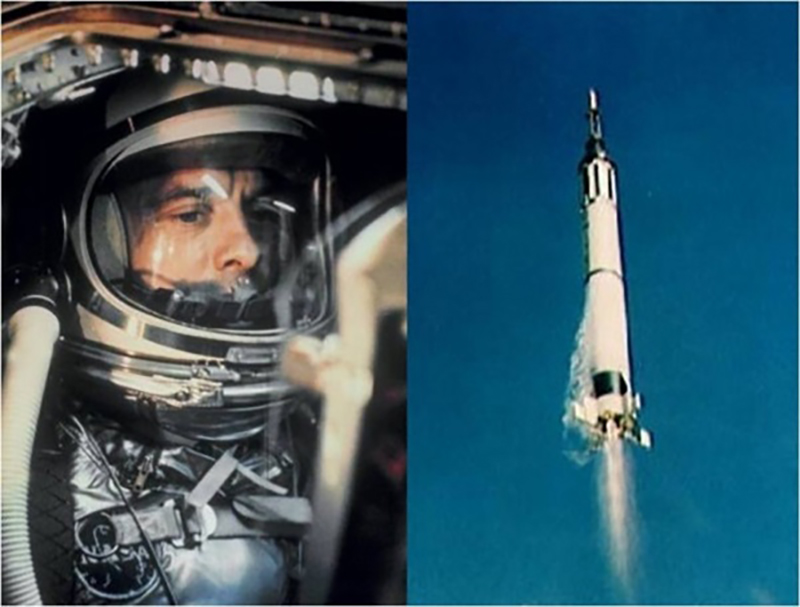 On May 5, 1961, Alan Shepard (left) carried out the first American spaceflight, climbing some 116 miles (188 km) above Earth’s surface with the help of a V-2-inspired Redstone rocket (right). Credit: NASA

Early on May 5, 1961, the United States came to a standstill. A Philadelphia judge halted all court proceedings, crowds in Times Square sang and danced, and California traffic slowed to a crawl. In the White House, President John F. Kennedy stood dumbstruck, with his hands shoved deep into his pockets and his eyes fixed on an unlikely television picture. On this late spring morning 60 years ago, America safely sent its first man into space, causing an anxious nation to collectively exhale a sigh of relief.

That man was 37-year-old Alan Shepard, a gruff New Englander and progeny of a wealthy and fiercely loyal military family. His adventurous spirit, keen wit, and a single-minded determination to be the best led the U.S. Navy to handpick Shepard to test its most advanced aircraft.

Russia gets there first

Chosen in 1959 as one of NASA’s original “Mercury Seven” astronauts, Shepard’s thirst for pushing boundaries would ultimately carry him to the Moon. Still, his selection as America’s first space traveler was undoubtedly his proudest accomplishment. “Not because of the fame or the recognition,” Shepard once said, “but because America’s best test pilots went through this selection process, down to seven guys, and of those seven, I was the one to go.”

After learning of his important role in early 1961, Shepard embraced his wife, Louise Shepard, and told her that she had her arms around the world’s first spaceman. But her reply was not quite what he had expected. “Who let a Russian in here?” she playfully jibed. She knew the Soviets had already launched the first artificial satellite, Sputnik, put dogs into orbit, and flown probes to the Moon. Sending a man into space, surely, was next on their list.

Louise Shepard’s offhand remark returned to bite on April 12, 1961, when Yuri Gagarin carried out the first human spaceflight by riding Vostok 1 around the planet, returning to instant global fame. The United States had missed yet another chance to be first.

In the pre-dawn darkness of May 5, as Shepard climbed aboard the Freedom 7 capsule at Cape Canaveral’s Pad 5, he knew that catching the Russians would take a little time. His 83-foot-tall (25 meters) Redstone rocket — a direct descendent of Nazi Germany’s feared V-2 missile — was not powerful enough to achieve orbit, as Vostok 1 had done. Instead, it would only carry Shepard’s capsule 116 miles (188 km) into space before splashing down 15 minutes later in the Atlantic Ocean.

But good fortune did not seem to be on Shepard’s side that day. Banks of clouds rolling over Florida’s eastern seaboard threatened to delay the launch, as did a troublesome power inverter, an unexpected computer glitch, and unacceptably high fuel pressure in the Redstone rocket.

After three hours lying on his back, Shepard’s morning coffee and orange juice finally induced the call of nature. “Man, I gotta pee,” Shepard radioed. With only a 15-minute flight planned, the need for a toilet break had gone totally unanticipated.

Shepard had little choice but to relieve himself in his pressure suit. The spacecraft’s power was turned off, lest he short-circuit the medical wiring or thermometers, and his cotton underwear and Freedom 7’s pure oxygen atmosphere absorbed the result. The first American astronaut, wrote Shepard’s biographer Neal Thompson, was thus spared the humiliation of getting electrocuted by his own urine.

At 9:34 a.m. EST, with 45 million Americans watching or listening, Shepard heard the launch command and instinctively reached for the mission timer as the Redstone’s engine breathed fire with 78,000 pounds (35,000 kilograms) of thrust. And although the jolt of liftoff was gentler than he had expected, the astronaut’s heart rate nevertheless jumped from 80 to 126 beats per minute.

Two minutes after launch, the rocket’s engine shut down as intended, yielding an ethereal silence in the capsule. Flying free of the Redstone, Shepard had only a handful of minutes to test Freedom 7’s systems, twirling his ship through pitch, yaw, and roll axes while travelling at 5,000 mph (8,000 km/h) — more than three times faster than any American in history.

Peering through the capsule’s periscope, Shepard beheld Lake Okeechobee at the northernmost tip of the Everglades, as well as Andros Island, the shoals off Bimini, and the cloud-covered Bahamas. “What a beautiful view,” he declared, to no one in particular. 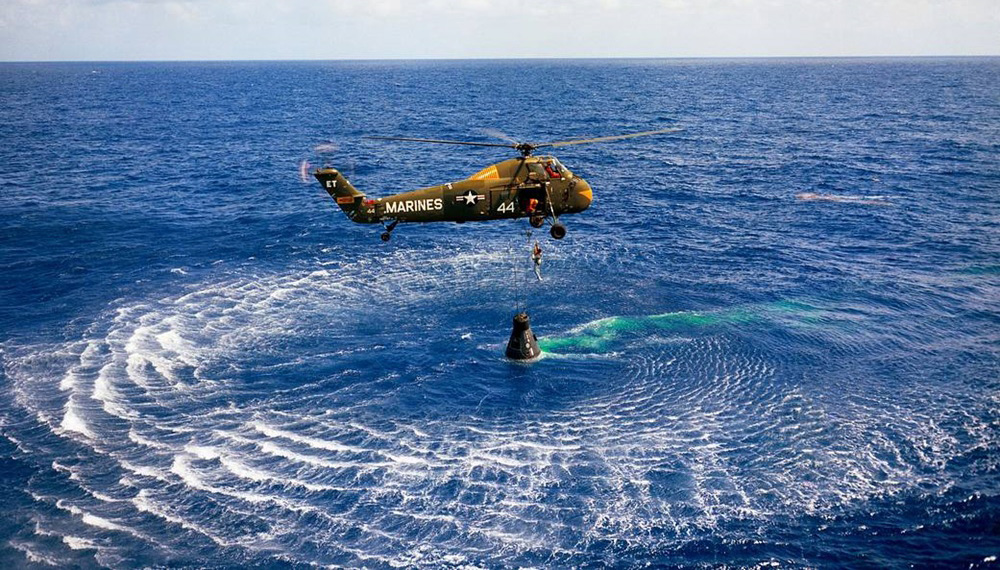 A helicopter picks up Alan Shepard from the Atlantic Ocean after the first American spaceflight on May 5, 1961. Credit: NASA

Shepard and Freedom 7 splashed down within sight of the aircraft carrier U.S.S. Lake Champlain. And from the deck of the ship itself, hundreds of sailors applauded America’s newest hero — a hero whose singular achievement placed the United States on a path of space exploration that endures to this day.

The era of lunar resource use is quickly approachi