The science behind the Big Bang theory

Evidence of the Big Bang theory and what happened immediately after the explosion.

The first suggestion of the Big Bang was in 1912. Later in the 1930s, Hubble used the worlds largest telescope and showed that the distant galaxies all appeared to be receding from us. That means that the farther away they are, the faster they are retracting. The first and most confident evidence we have came from 1964 when scientists at the Bell Labs discovered the cosmic microwave background radiation, confirming there was a Big Bang. This revolutionized cosmology, how we see the universe, and how we view our place within it.

What happened minutes before the Big Bang?

Scientists have come up with several possible explanations for what happened before the Big Bang, if anything at all, and it is entirely possible that there was no previous era. Assuming this is true, it means that matter, energy, space, and time just began abruptly.

What happened after the Big Bang?

What happened immediately after the explosions is called the Planck Era: the earliest known period of time. According to the theories of physics, one second after the Big Bang, the heat of the universe caused atoms to collide with enough force to create a ten billion degree soup of neutrons, protons, electrons, positrons, photons, and neutrinos. Essentially, cosmic inflations created a soup of sub atomic particle plasma. It appears that this is what gave rise to dark matter and likely the phase in which matter gains superiority over anti matter.

Within the first 300 seconds of the existence of the universe, the elements hydrogen, helium, and some lithium form from the protons and neutrons. This process is called nucleosynthesis and is a theory that accurately predicts the abundances of elements and isotopes found in the early samples of the universe, like some of oldest stars. This verification is a strong indication that our model of the universe is accurate. 300,000 years later, when the nearly uniform soup cooled, atoms formed other nuclei. Photons ceased to scatter through space, turning the prior opaque universe into one with visible light. Those same photons, the actual after glow of the Big Bang known as cosmic background radiation, can still be observed today.

Cosmic Background Radiation: The earliest radiation that can be detected 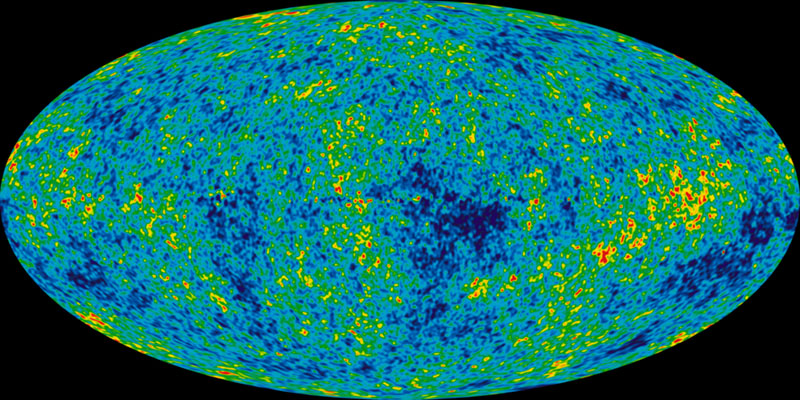 The full-sky image of the temperature fluctuations (shown as color differences) in the cosmic microwave background, made from nine years of WMAP observations. These are the seeds of galaxies, from a time when the universe was under 400,000 years old. Credits: NASA

The Dark Ages: Before the first stars were born

About one million years after the Big Bang, we enter a period call the Dark Ages, which are known as the final frontier of cosmology. Little is known about this period, except that is was the period before the first stars were born. The Dark Ages are thought to have lasted about 100 million years. However, due to the limit of current observations, the oldest object we can see are at a time when the universe was only several hundred million years old. Two future projects that have already begun construction, are specifically designed to shed some light on this era and hopefully bring the Dark Ages to an end.

The end of the universe

The ultimate fate of the universe all hinges on dark energy. If the universe continues to grow at about the same pace, 30 billion years from now, all the galaxies would be pulled from our view and all the evidence of the Big Bang would be completely lost forever. This would result in all the last stars burning out in about 100 trillion years, so we have plenty of time left.

The universe is a bizarre place. To learn more about what makes it so strange, check out our list of 20 unusual space facts.