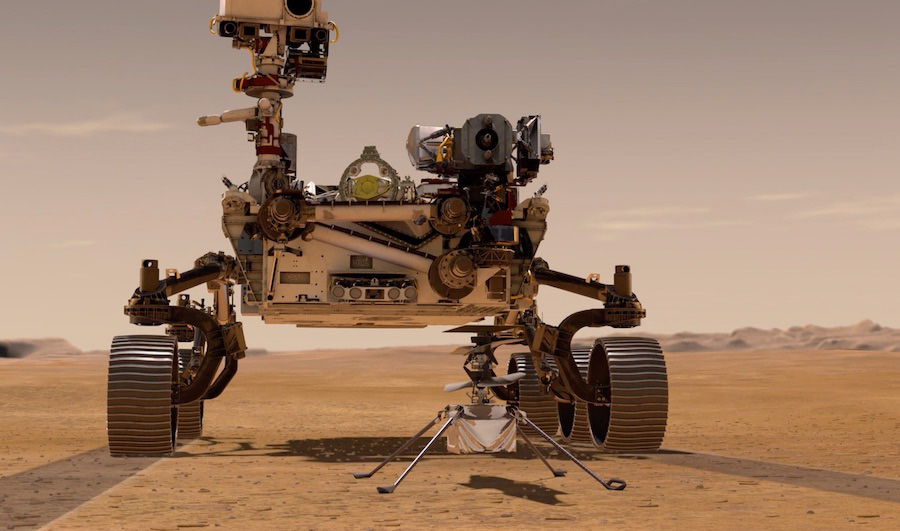 The Perseverance rover mission to Mars 2020

The Perseverance rover is headed to Mars; here’s everything you need to know.

NASA’s Perseverance rover launched on July 30, 2020 and plans to touch down on Mars on February 18, 2021. NASA raised awareness for this mission by a Send Your Name to Mars campaign where almost 11 million names were submitted and put on a microchip aboard Perseverance.

The Perseverance rover will investigate an astrobiologically relevant ancient environment on Mars, including its surface history, assessment of its past habitability, the potential for preservation of biosignatures within accessible geological materials of past microbial life, and even attempt to pull oxygen out of thin Martian air. It will also carry and fly a first of its kind helicopter drone. The design of the Perseverance rover has evolved from the Curiosity rover and will use many components already fabricated and tested. The rover will take containers along its route for a potential future sample return mission. Its planned that the rover will collect and package as many as 31 samples of rock cores and surface soils for a later mission to bring back for definitive analysis on Earth. NASA does not presume that life ever existed on Mars, but given the recent curiosity and findings, past Martian life seems possible.

The combination of the larger instrument suite, new sampling and caching system, and modified wheels, makes the Perseverance rover heavier than its predecessor Curiosity. The rover will include a robotic arm, measuring almost 7 feet long. The arm will be used in combination with the turret to analyze geologic samples from the Martian surface. All in all, the Mars 2020 rover is about 10 feet long (not including the arm), 9 feet wide, and 7 feet tall. The rover is powered by a device that converts heat from radioactive decay of plutonium dioxide into usable electricity. Unlike solar panels, the Radioisotope Thermoelectric Generator (RTG) provides engineers with significant flexibility in operating the rover’s instruments, even at night during dust storms and through the winter seasons. 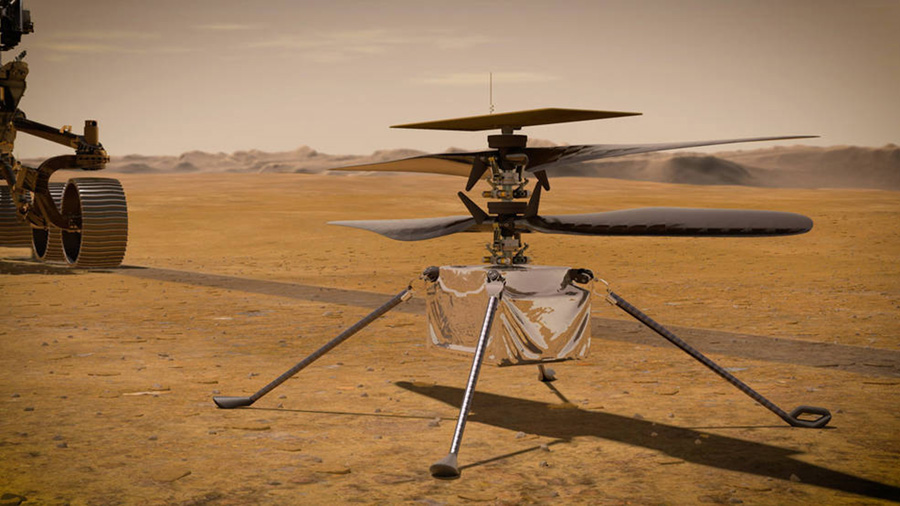 Shortly after Perseverance lands on Mars, it will find a suitable location to release a tiny helicopter named Ingenuity. This ambitious device is a robotic helicopter that will begin testing the technology to scout interesting targets for study on Mars and quite possibly help plan the best driving route one day for future rovers. The aircraft will be deployed from the rover’s deck and is expected to fly up to five times during its 30-day test period. Then, Perseverance plans to leave it behind for the rest of the mission. Each flight will take no more than about three minutes, but it could potentially cover a maximum distance of about 2,000 feet per flight. It will use autonomous control and communicate with Perseverance directly after each landing.

The rover mission and launch are estimated to cost about two billion dollars. The rover’s planned surface mission is at least one Mars year, which is around 669 sols or 687 Earth days. The mission will explore Jezero crater: a site likely to have been habitable that scientists speculate was an 800-foot-deep lake about four billion years ago. Jezero today features a prominent river delta, which is extremely good as a preservative. The sediments in the delta likely include carbonates and hydrated silica, which are known to preserve microscopic fossils on Earth for billions of years. It will demonstrate technology needed for the future human and robotic exploration of Mars. A key mission requirement is that it must help prepare NASA for its long-term crude mission efforts.

When we do send humans to Mars, of course we want them to return safely. To do so, Mars Oxygen ISRU Experiment (MOXIE) plays a key role. This piece of equipment will demonstrate new technological advances to enable propellant and consumable oxygen production from the Martian carbon dioxide atmosphere. It will also analyze characterizations of atmospheric dust size and morphology to understand effects on the operation of exposed systems. MOXIE is about the size of a car battery, but for future oxygen generators to support human missions on Mars, they must be at least 100 times larger. Astronauts need a rocket to lift off Mars, and liquid oxygen propellant is something that we could make there rather than bring it with us. The Perseverance mission will also attempt to identify subsurface water, improve landing techniques, characterize weather, dust, and other potential environmental conditions that could affect future astronauts living and working on Mars. One thing is for sure and that is that we must continue marching onward because the universe sure isn’t going to slow down for us to catch up.