How was the Moon created?

There are three theories as to how the Moon could have been created.

In 1898 it was suggested that Earth and the Moon were once a single body. This hypothesis was that a molten moon had been spun from Earth because of centrifuge-like forces and became the dominant explanation. There are three theories as to how our planet satellite could have been created: the giant impact hypothesis, the co-formation theory, and the capture theory.

The giant impact hypothesis, also known as the Theia Impact

The early solar system was a violent place and several newly formed bodies never made it to full planetary status. One of these could have crashed into Earth not long after the young planet was formed. Known as the giant impact hypothesis or the Theia Impact, the Moon formed from the ejecta of a collision between the proto-Earth and a Mars-sized planetesimal, approximately 4.5 billion years ago in the Hadean eon about 20 million to 100 million years after the solar system coalesced. Theia collided with Earth throwing vaporized chunks of the young planet’s crust into space. Gravity bound the ejected particles together creating a moon that is the largest in the solar system in relation to its host planet. This sort of formation would explain why the Moon is made up predominantly of lighter elements, making it less dense than Earth. The material that formed it came from the crust, while leaving the planet’s rocky core completely untouched.

When young Earth and this rogue body collided, the energy involved was 100 million times larger than the event believed to have wiped out the dinosaurs. This is the prevailing theory supported by the scientific community. Some evidence includes how Earth’s spin and the Moon’s orbit have similar orientations. However, at the end of the day, giant collisions are consistent with the leading theories of formation of the solar system.

Apollo moon rocks reveal the origin of the moon 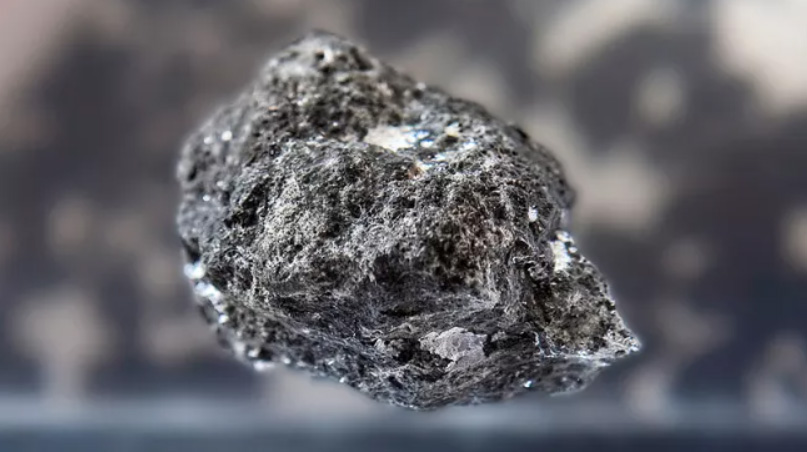 This NASA moon rock was collected by astronauts on the Apollo 14 mission to the lunar surface in 1971. Photo: © NASA/Sean Smith

Our strongest evidence for the giant impact scenario comes from rocks collected during the Apollo Moon landings, which show oxygen isotope ratios nearly identical to those of Earth, implying a common origin.  In the aftermath of the giant impact, while Earth and the proto-litter disk were molten and vaporized, the two reservoirs were connected by a common silicate vapor atmosphere. The Earth and Moon system become homogenized by convective stirring while the system existed in the form of a continuous fluid. Such an equilibration between the post impact Earth and the proto-lunar disc is the only proposed scenario that explains the isotopic similarities of the Apollo rocks with rocks from the Earth’s interior.

Then, scientists discovered in 2014 that the Apollo samples had a slightly different signature from rocks here on Earth. The difference was minor, but statistically significant. These findings could have serious implications for the moon formation debate.

Moons can also form at the same time as their parent planet. Under the co-formation theory, gravity would have caused material in the early solar system to draw together at the same time as gravity bound particles together to form Earth. Such a moon would have a very similar composition to the planet and would explain the Moon’s present location. Although Earth and the Moon share much of the same material, the moon is less dense than our planet, which would likely not be the case if both started with the same heavy elements at their core.

Now perhaps Earth’s gravity snagged a passing body like some of the Martian moons. Under the capture theory, a rocky body that formed elsewhere in the solar system could have been drawn into orbit around Earth. The capture theory would explain the differences in the composition of Earth and the Moon; however, such orbiters are often oddly shaped rather than being a spherical body like the Moon.

Although the co-formation theory and the capture theory both explain some elements of the existence of the Moon, they leave many questions unanswered. At present, the giant impact hypothesis seems to cover many of these questions, making it the best model to fit the scientific evidence for how our Moon was created.

NASA has sent more than 500 Apollo lunar samples in recent years to scientists around the world for ongoing analysis. Each year we get a handful of scientific insight and updates to what we have learned from these samples. NASA will continue that work by moving forward to the moon with astronauts landing on the lunar south pole hopefully by 2024. This work will bring neoteric knowledge, unveil the truth for us to really understand the true origin of our moon, and hopefully inspire the next generation.