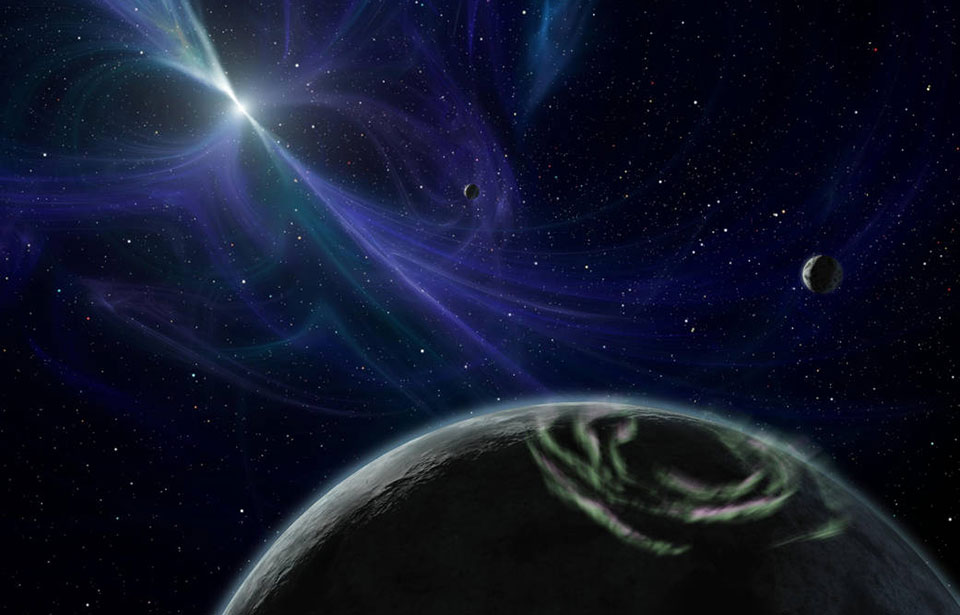 Exoplanet PSR B1257+12, the first confirmed exoplanet, orbits a pulsar in this artist’s concept. Credit: NASA/JPL-Caltech

What are the FIVE strangest planets in the universe?

It’s impossible to decide, but here are the top contenders for the strangest planets in the cosmos.

Since the early days of exoplanet discovery, astronomers have confirmed almost 4,200 worlds orbiting distant stars, as well as thousands of more candidates. And with those kinds of numbers, there are bound to be a few strange planets, ones that researchers could barely dream up not too long ago. So, here are some top contenders for the strangest planets in the universe.

(Disclaimer: Every planet has its idiosyncrasies, so the below list is highly debatable. The choices reflect the author’s opinions on the strangest planets, not necessarily the views of professional astronomers.)

An artist’s concept of the water world GJ 1214 b. Credit: Tyrogthekreeper/Wikimedia Commons

Located about 40 light-years from Earth, GJ 1214 b is a super-Earth nearly three times our own planet’s diameter and seven times Earth’s mass. Orbiting its red dwarf star once every 38 hours, this strange planet sports an estimated temperature of about 450° Fahrenheit (230° Celsius).

But its toasty temperature is not what makes it strange. According to a 2012 study based on observations by the Hubble Space Telescope, GJ 1214 b is actually a massive water world encapsulated by a dense and steamy atmosphere.

According to study author Zachory Berta, then at the Harvard-Smithsonian Center for Astrophysics, in a press release, “GJ 1214b is like no planet we know of. A huge fraction of its mass is made up of water.” Furthermore, he said, “the high temperatures and high pressures would form exotic materials like ‘hot ice’ or ‘superfluid water’ — substances that are completely alien to our everyday experience, making it one of the strangest planets in the world. 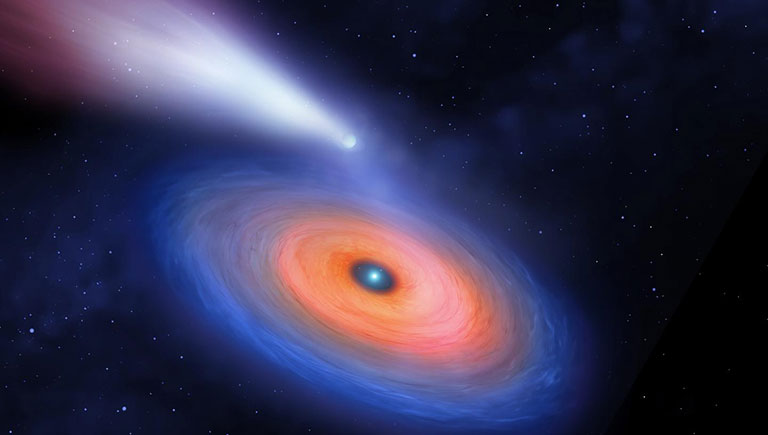 A giant planet loses mass as it orbits beyond the gas disk of the puny white dwarf WDJ0914+1914, as seen in this artist’s concept. Credit: University of Warwick/Mark Garlick

In 2019, astronomers discovered a Neptune-sized planet orbiting an Earth-sized star — a truly strange setup. But the star in question, a tiny white dwarf named WDJ0914+1914, isn’t much of a star anymore. It’s more like a stellar corpse. It no longer fuses elements within itself to fight gravitational collapse. It’s more akin to a highly compressed, smoldering ember with a temperature of some 49,500 degrees Fahrenheit (25,000 Celsius). And that’s hot enough for it to slowly vaporize the nearby planet.

“This star has a planet that we can’t see directly,” study author Boris Gänsicke from the University of Warwick said in a press release at the time. “But because the star is so hot, it is evaporating the planet, and we detect the atmosphere it is losing.” In fact, the searing star is sending a stream of vaporized material away from the planet at a rate of some 260 million tons per day. But despite the planet’s mass loss, the researchers say that in about 350 million years, the world will have only lost about 0.04 Neptune masses — “an insignificant fraction of its total mass.” 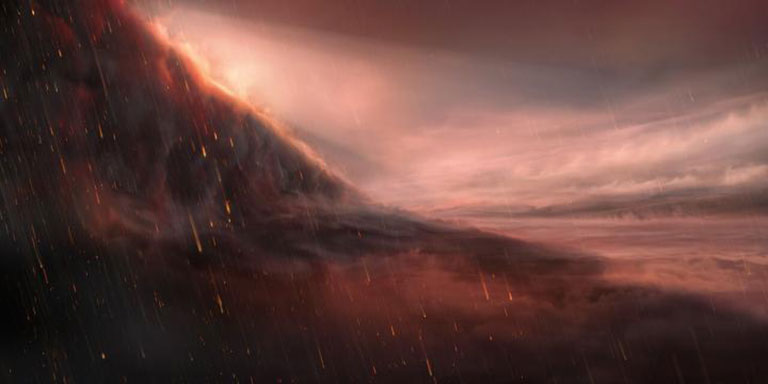 The extremely hot gas giant WASP-76 b is suspected to rain iron from its skies at night, as seen in this artist’s concept. Credit: ESO/M. Kornmesser

WASP-76 b is a bizarre hot Jupiter that rains iron at night. But the daytime side of this world isn’t any less hellish, either. There, temperatures can swell up to 4,300 degrees Fahrenheit (2,400 degrees Celsius) — hot enough to vaporize metal.

WASP-76 b is slightly smaller than Jupiter and sits some 640 light-years from Earth, and its horrifying weather is caused by its truly extreme orbit. Gas giant worlds like WASP-76 b are called hot Jupiters because they orbit uncomfortably close to their home stars — in this case, nearly 10 times closer than Mercury is to our Sun. That proximity leaves WASP-76 b “tidally locked” to its star, with one side permanently baking in light and the other stuck in eternal night.

SIMP J01365663+0933473, shown here in this artist’s concept, is a massive, nearby exoplanet with a powerful, aurora-generating magnetic field. Credit: Caltech/Chuck Carter; NROA/AUI/NSF

A bizarre rogue planet without a star is roaming the Milky Way just 20 light-years from the Sun. And according to a 2018 study published in The Astrophysical Journal, this strange, nomadic world has an incredibly powerful magnetic field that is some 4 million times stronger than Earth’s. Surprisingly, the exoplanet also seems to generate spectacular auroras that would put our own northern lights to shame, making it one of the strangest planets in the world.

The peculiar and untethered object, succinctly named SIMP J01365663+0933473, was first discovered back in 2016. At the time, researchers thought SIMP was a brown dwarf: an object that’s too big to be a planet, but too small to be a star. However, a later study showed that SIMP is just small enough, at 12.7 times the mass and 1.2 times the radius of Jupiter, to be considered a planet — albeit a mammoth one.

According to the study, SIMP’s magnetic field helps it produce stunning light shows, but the aurorae are not generated in the same way as they are on Earth. Instead, the researchers think that a moon orbiting SIMP helps produce the aurorae, much like Io does for Jupiter. 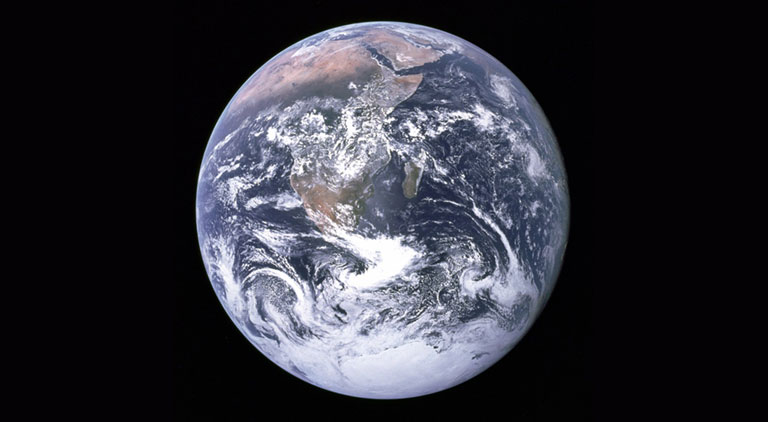 Earth has abundant life because water exists on its surface. When that ceases to be the case, perhaps as soon as a billion years from now, life will perish and we will have to find another home world. Credit: NASA

This undoubtedly bizarre world is not only notable for its habitable conditions — including vast amounts of water, agreeable temperatures and pressures, and a magnetic bubble that protects the planet. Earth also host the most intelligent life known in the universe!

Earth is the only place in the cosmos we are certain can support life, making it indeed the strangest planet we know of. That’s because Earth is more than just a spherical hunk of inanimate material that evolves over time through geologically processes and outside cosmic influences. Our planet contains critters and vegetation that literally change the face of the world itself — for better or worse.

But no matter the actions earthly organisms decide to take over moving forward, Earth is not destined to remain hospitable forever. In about 1 billion years, the aging Sun will start increasing its radiation output (which happens long before it swells into a red giant), evaporating Earth’s oceans into space. By about 2.5 billion years from now, all of our planet’s remaining water will be lost to space, marking the final gasp of any life lingering on the planet.