A brief history of Halley’s Comet

As arguably the most famous comet of all time, Halley’s Comet has spent millennia returning to Earth’s skies roughly once every 75 years.

Although we now know that the orbit of Halley’s Comet takes it through the inner solar system about once every 75.3 years, we didn’t always know that was the case. Comets have been seen in the skies throughout human history. And until just a few hundred years ago, astronomers thought that the visitors only dropped by once, forever leaving the solar system after their brief encounters. 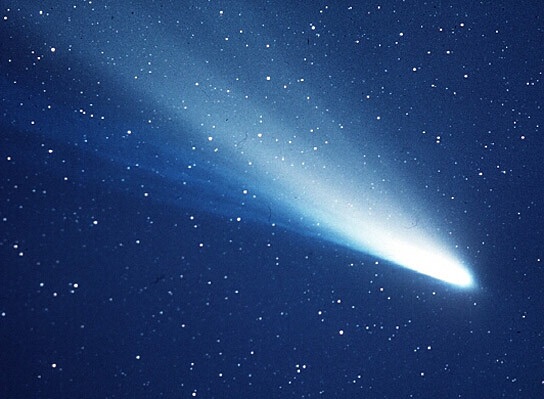 Although its giant tail can make it appear much larger (as seen in this image taken in 1986), the body of Halley’s Comet is only about 5 miles (8 kilometers) wide by 9 miles (15 km) long. Photo: NASA

The solar system is a complex place. Aside from the Sun and major planets, it’s filled with hundreds of thousands of small bits of debris left over from its formation some 4.6 billion years ago. This debris can largely be categorized as comets or asteroids.

But in 1705, English astronomer Edmond Halley (1656-1742) pushed back on this idea. By using Newton’s theories of gravity and planetary motion, Halley calculated the orbits of multiple comets. And by noticing that the recorded motions of comets from 1531, 1607, and 1682 all shared striking similarities, the astronomer concluded that these were actually just multiple passes by the same comet.

Extending the logic, Halley then predicted that the comet would return again around 1758-1759. Lo and behold, it came right on cue (minus a slight delay due to Jupiter). This made it the first such solar system object with a confirmed periodicity, earning Halley’s Comet its 1P designation.

Unfortunately, though, Edmond Halley died more than 15 years before his prediction was fulfilled.

In the many decades since Halley’s discovery of the periodicity of his namesake comet, astronomers have continued to turn their collective attention to the cosmic visitor any time it returns.

Most recently, Halley’s Comet graced Earth’s skies in 1986. So, while it was in the neighborhood, space agencies made sure to utilize spacecraft to get up-close-and-personal looks. 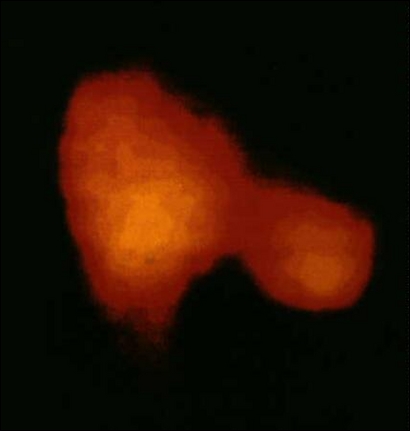 The Soviet Vega 2 spacecraft captured this image of the nucleus of Halley’s Comet as it flew through the inner solar system in March 1986. Photo: ESA

The Soviet probes Vega 1 and 2 — whose primary missions focused on Venus — both made passes by the comet, capturing the first images of the comet’s nucleus. At its closest, Vega 2 came within about 5,000 miles (8,000 km) of the icy object.

NASA jumped into the fray too. Using their existing International Cometary Explorer program, which consisted of three satellites launched between 1977 and 1978, they managed to capture revealing images of Halley’s Comet from a whopping 17.3 million miles (28 million km) away.

Then there was the European Space Agency’s Giotto mission, which came within just 370 miles (600 km) of Halley’s Comet. This mission revealed jets that are actively spewing gas and dust from the comet, as well an incredibly dark surface that reflects just 3 percent of the light that strikes it, making Halley’s Comet one of the darkest known objects in the solar system.

When will Halley’s Comet return?

Although considered a short-period comet, Halley’s Comet won’t return to Earth’s skies until 2061. But when it does, it’s expected to be much brighter than it appeared during its last pass.

So, although some will get lucky enough to see the Halley’s Comet pass overhead twice in their lifetimes, others will be fortunate if they even catch one majestic pass of cosmos’ most famous comet.